The Free Democrats Party’s Chairman Khachatur Kokobelyan and the spokesperson … 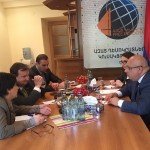 During the meeting, wide ranging topics, including Armenia’s domestic and foreign policy issues, the Nagorno-Karabakh conflict and the political situation after April war, as well as the Draft Electoral Code of Armenia and the current debates on it, were discussed.

The Ambassador Mills assured that with regard to the electoral reforms currently under debate in Armenia, they remain hopeful that the final proposal will include all the major OSCE/ODIHR recommendations.

“We hope it will reflect the broad consensus of views and opinions found throughout Armenia’s political spectrum and civil society. Civil society has an obligation to work with the government and opposition in good faith to achieve a credible election process. An election process that has credibility is essential to democracy and will also boost Armenia’s economy by helping to attract increased international investors”- said the U.S. Ambassador to Armenia Richard M. Mills.

The Chairman Kokobelyan spoke about Free Democrats Party’s proposals to the Draft Electoral Code stressing the importance of their inclusion in the final draft.

Whit regard to the Nagorno-Karabakh issue the Ambassador Mills assured that the Embassy continues to closely monitor the events in Nagorno-Karabakh and urge the sides to recommit to a durable ceasefire and serious negotiations on a peaceful resolution of the conflict.

“We urge the sides to come to the negotiating table”- added the Ambassador Mills.

Kokobelyan highlighted the necessity of the resumption of Karabakh peace talks.

“The talks should be resumed without delay. Moreover, in order to achieve effective solutions to Karabakh issue, we stress the importance of NKR’s return to the negotiating table”- added Khachatur Kokobelyan.