The leader of the Free Democrats Party Khachatur Kokobelyan hosted … 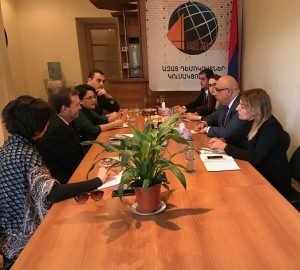 The leader of the Free Democrats Party Khachatur Kokobelyan hosted H.E. Richard M. Mills, the US Ambassador to Armenia at the Party’s headquarter earlier today.

The two-hour-long meeting was attended also by Mr. Ruben Harutyunyan, Deputy Head of the Political and Economic Section of the US Embassy, Ms. Lilit Ohanyan, Political Specialist at the US Embassy, and Ms. Anzhela Khachatryan, the Vice Chairperson, Mr. Narek Ayvazyan, a board member, and Ms. Sona Minasyan, the spokesperson of the Free Democrats Party.

The parties discussed issues pertaining to upcoming parliamentary elections and the political situation in Armenia. H.E. Richard M. Mills highlighted the importance of ensuring fair and transparent parliamentary elections to be held in April and added: “In the upcoming Parliamentary elections, the Armenian people deserve to have the opportunity to make an unfettered, transparent, and accountable choice at the ballot box about their future.  For that, there needs to be an equal playing field prior to election day for all political parties, coalitions, and unions – including fundraising and financial expenditure, access to media, and regional representation.  We will continue to closely monitor this electoral process with the aim of helping to support a sovereign, prosperous Armenia living at peace with its neighbors.’’

Khachatur Kokobelyan talked about Free Democrats Party’s participation in the upcoming parliamentary elections and emphasized that the upcoming elections would be significantly different as compared to previous elections since the new Electoral Code provides for new rules of the game. Moreover, Mr. Kokobelyan mentioned that the upcoming elections are extremely important since their outcomes will be decisive for the composition of the new government, the executive branch in line with the newly Amended Constitution of the Republic of Armenia.

Mr. Kokobelyan also highlighted the importance of ensuring free, fair, and transparent elections both for the Armenian people and the development of the Republic of Armenia and its reputation in the international community.