Member of Parliament Khachatur Kokobelyan, the chair of Free Democrats … 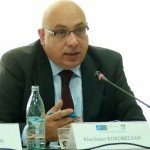 Member of Parliament Khachatur Kokobelyan, the chair of Free Democrats Party, has introduced the draft resolution on Armenia’s secession from the Eurasian Economic Union.

Taking into consideration the fact that no actual steps have been taken over the year of Armenia’s membership to the Eurasian Economic Union (EEU) to ensure the implementation of provisions set forth in the Agreement on Armenia’s Accession to EEU signed on 29 May 2014 and entered into force on January 2, 2015, particularly:

– No progress has been recorded in the planned steps to develop friendly relations among the Parties and strengthen the solidarity and cooperation between their people.

– No visible steps were taken to promote deeper economic integration among the Parties to ensure social progress, prosperity and well-being of their people. On the contrary, according to the statistics provided by the RA National Statistical Service, the exports from Armenia to the EEU countries have dropped by 4.7% in 2015, including by 28.1% to Russia, 41.9% to Belarus, 30.1% to Kazakhstan. Imports have dropped by 26.2% from January to November, 2015.

Though the agreement on the EEU states that this is an economic union, during the aggression of Azerbaijan against NKR the EEU member states refused to hold the meeting of their prime ministers of the EEU member states which was initially planned to be held in Yerevan “not to insult Azerbaijan”. In fact, during the days of the aggression the members of the EEU served the interests of the country which is not a member of the Union, ignoring the interests of Armenia. This attitude of the member states shows once again that EEU is not an economic union but an ineffective political and economic alliance.

Considering the above-mentioned circumstances, I suggest that the President and the Government start the process of termination of Armenia’s membership in the Eurasian Economic Union.