Lragir.am-‘s Interview with the leader of Free Democrats Party, MP … 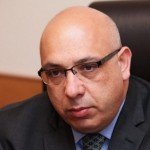 – Mr. Kokobelyan, it turned out that the presidents of Khazakhstan and Belarus did not accept the invitation to participate in the events dedicated to the 100th anniversary of Armenian Genocide, while only the president of Russia will attend the events. What does this mean?

– First, in any event, we should thank all the people who are visiting Armenia for commemoration of Armenian Genocide. It would be better if the visiting presidents, as a rule, were those of democratic countries in which rule of law and human rights are respected. However, this attitude proves, once again, a very important aspect that we cannot ignore, i.e., the Republic of Armenia is a member of a Union, economic or political, I don’t know how to name it, which Armenia has been forced to join. As I’ve always said, it is a political unit, a Union which is customized to Putin’s regime regardless of how it is named. Hence, Armenia has been forced to enter to that Union because Armenia’s nation never had the opportunity to discuss that issue and it was not the choice of Armenia’s nation. Likewise, we had never learned what we lose by signing the Association Agreement and what we gain by joining EEU. Moreover, in this short period of time the discussions about the economic achievements, the 170 million-strong market and so on, have gone away.

I don’t think that we lose something while some presidents of EEU member-states refuse to participate in the Genocide commemoration ceremony, because a non-attendance of an authoritarian country’s president will not be deemed as an essential message to the world.

However, the important point here is that those presidents, who incidentally consider themselves the architects of the Eurasian Economic Union, showed, by their behavior, an inadequate, not serious and not respectful attitude hence towards that Union. Thus, it was proved, once again, that this a formal Union and has no value in economic, political, cultural and military spheres. For instance, we are witnessing how quickly the relationships, including sale of weapon, between those countries and our adversaries are developing. I would like to emphasize one more time that today, on the eve of 100th anniversary, the first two suppliers of weapon to Azerbaijan are Russia and Belarus respectively. Many people think that Putin preferred Armenia to Turkey. I think it’s a very surface approach for a simple reason that the cooperation between Russia, Turkey and Azerbaijan in the economic, military spheres, also regarding gas prices, and so on, is incomparable with the Armenia-Russia cooperation on many issues. Thus, as our people would say, if we are talking only about moral victories or stock exchange announcements, the presidents of the EEU member-states didn’t even ensure that.

– On April 24, a Russian delegation of senior officials will visit Turkey to attend the Gallipoli victory celebration. Whereas it is known that Turkey has deliberately organized that event to cast a shadow on Armenian events.

– At this stage Turkish anti-propaganda played a big role. In my opinion, Turkey made a mistake after a mistake, and, by its escalated policy put itself in a deadlock. However, we shouldn’t assess Russian-Turkish relations under the surface approach that Putin’s refusal to visit Turkey impairs that relationship. On the contrary, by his decision to visit Armenia, Putin is showing his position on certain issues; however, developing, concurrently, rapid economic relations with Turkey. It should be taken into account that Russia is in such a situation today, where any country and any foothold is very important for it, because it seems that Russia stayed alone against the civilized world. Today, Putin is acting against the civilized world. You can see which level we have reached and what political system we have chosen. I think this should be a great lesson for our society and firstly for all politicians to be more realistic and not to be engaged in the development of Armenian-Russian non-existing relations. One hundred years ago, during that crime, Russia, was guided by his own interests, and the same policy continues till now. It is enough; we have to recognize that our nation has its own concerns and its own political interests. We should recognize this without contradicting the superpowers and being able to find our own solutions.

– Did Armenia’s membership in the Eurasian Economic Union play a role in this situation where, indeed, few countries’ presidents accepted Serzh Sargsyan’s invitations?

Europe’s adoption of the Armenian Genocide Resolution showed that European countries, at least through their representatives, unanimously voted for the condemnation of that crime. However, in terms of political visits, Armenia’s membership in the EEU could play a certain role. Though, I do not think that it’s important because the president of one of the most important European countries, the French president, will attend the events.

– At this stage Armenia is negotiating to sign a new document with EU. Do you think that this process will be successfully completed considering Armenia’s current status?

As far as we are informed, there is a clear approach to this issue. Fortunately, Europe objectively realized that there is no need to close the doors on Armenia, because doing so they will force Armenia to move to another civilization. Unfortunately, I do not think that an essential document will be signed. It seems, that this was mentioned at the level of statements. However, I think there will be some formalization, in the form of a document, of what we have done so far by describing the three and a half years of negotiation phase. Also, Europe has announced that some mandate will be established to create opportunities for the future fundamental work. Thus, again, it becomes evident that our path is the European vector of civilization in terms of both the economy and the values. Another system of values cannot take Armenia out of this situation. And without introducing the system of values, simply, we cannot do anything.