Chairman of the Free Democrats party Khachatur Kokobelyan believes that … 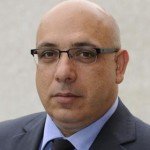 Chairman of the Free Democrats party Khachatur Kokobelyan believes that Armenia’s Constitutional Court issued a political ruling by confirming the constitutionality of the agreement on Armenia’s accession to the Eurasian Economic Union (EEU).

“I am sorry that our Constitutional Court issued a political ruling rather than a legal one. This is a fact,” Mr Kokobelyan told Tert.am.

“Regrettably, it is not a legal document. It obviously runs counter to our Constitution. The EEU Economic Committee’s decisions are going to be obligatory for Armenia and for the other EEU member-states. In this respect, it [the ruling] is obviously unconstitutional. Numerous facts are available, and in this respect I consider the Constitutional Court’s ruling more political than legal. I do not think any lawyer would disagree. Regrettably, our Constitutional Court normally issues vague rulings. This is one of the instances when a ruling is not so vague.”

According to the agreement, Armenia can secede from the EEU at any moment, and the Constitutional Court highlighted that point.

“First of all, one can leave any union, especially when it is an unconstitutional one. But Russia has approved the agreements. And Armenia’s Parliament or public have not so far had a chance to face the agreements. That is, Armenia’s public is not informed of what the Constitutional Court and Russia approved. And let no one say it is acceptable,” Mr Kokobelyan said.

As to whether a similar situation surrounded an Association Agreement with the European Union (EU), he said:

“With respect to the Association Agreement, it was stated it could not be made public during the negotiations, and three years and a half later Armenia’s people has never known what we actually declined.

“In the EEU’s case, our society has never faced the agreements. And it was wrong on their part not to make it public. Your state has conducted three-year-long negotiations, but you have no idea of the subject. Russia’s Parliament has approved it, but none of us has ever had a chance to see, read and understand this document.”